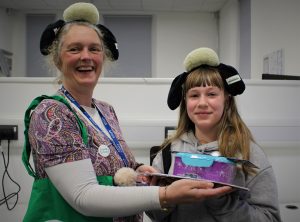 Alice Knight, Code Club Leader, presenting Audrey with her Shaun the Sheep : Mission to Space Code Club Competition prizes. Audrey was one of 12 winners in an international Code Club competition that saw over 680 entries from 35 countries.

Not only did Audrey receive a ‘swag bag’ of Shaun the Sheep and Code Club goodies (including some rather lovely Shaun the Sheep headbands), but the whole Code Club at Avanti Hall School also received badges and goodies to share…perfect for our end of term Christmas Coding Challenge next Tuesday.

It’s not too late to check out Audrey’s prize winning animation by going to ://shaunthesheepmovie.com/news/mission-space-winners-announced

Code Club runs from 4-5pm every Tuesday in term times in the IT Suite (sign up on the Arbor Parent Portal for next half-term).